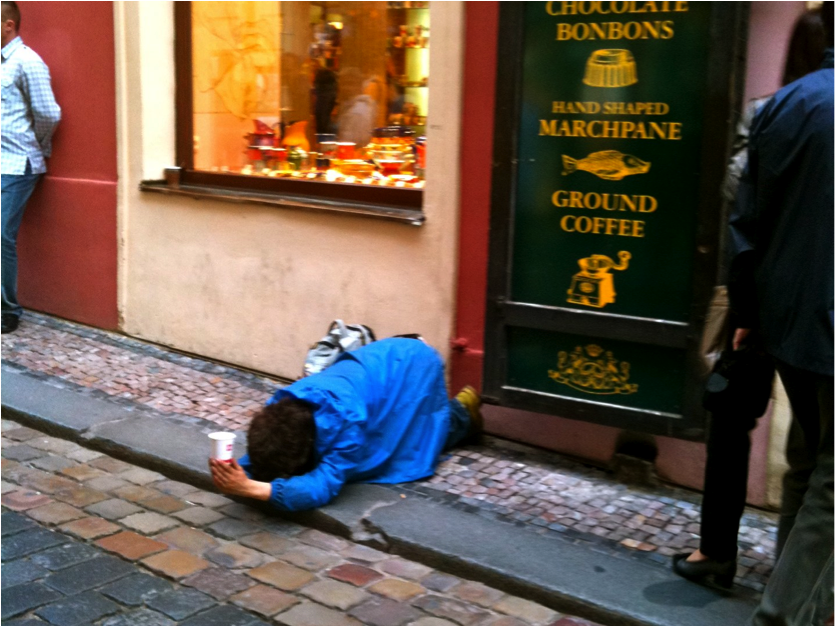 Recently I was asked a question that most of us grapple with.

“…I’ve been curious for years about discrepancies between Psychology (which I learn in school) and Sikhi… Psychology preaches that we must engage in self-care as healers. We must forgive ourselves, be loving to ourselves, believe in ourselves, have very high self-esteem and self-confidence, recognize our strengths, etc. Where does the Guru’s word lie in this? Sometimes I feel guilty, from a Sikh perspective, for trying to focus on my strengths, since Sikhi promotes humility, and there are shabads like “hum avgun bharay ek gun naahi.” So many shabads promote the individual being full of weakness and having no goodness…how I can find a balance within this? What is it that makes the Khalsa so bold, confident, and fearless, but so humble at the same time? How can we be confident without our ego overtaking us? …RK“

Does humility prevent self-confidence?  Or does self-confidence automatically prohibit humility?  Is humility just an excuse to not be over-confident?
Humility is the quality of being modest and respectful to others by a constant process of self reflection or examination of one’s ego. It expresses intrinsic self-worth such that there remains no need to impress others. I think the following story exemplifies this well:

Three young men hopped on a bus in Detroit in the 1930s and tried to pick a fight with a lone man sitting at the back of the vehicle. They insulted him. He didn’t respond. They turned up the heat of the insults. He said nothing. Eventually, the stranger stood up. He was bigger than they had estimated from his seated position — much bigger. He reached into his pocket, handed them his business card and walked off the bus and then on his way. As the bus drove on the young men gathered around the card to read the words: Joe Louis. Boxer. They had just tried to pick a fight with the man who would be Heavyweight Boxing Champion of the World from 1937 to 1949, the number one boxer of all time, according to the International Boxing Research Organization (second on the list is Muhammad Ali). Here is a man of immense power and skill, capable of defending his honour with a single, devastating blow. Yet, he chooses to forgo his status and hold his power for others — in this case, for some very fortunate young men .

Just because he chose to be non-assertive in this particular situation does not by any means imply that he was not confident or that he had any doubt about his ability to tackle the three guys.

We often confuse humility with timidity.

Humility is, not clothing ourselves in an attitude of self-abasement or self-denigration. Humility is all about maintaining our pride about who we are, about our achievements, about our worth – but without arrogance. It’s about a quiet confidence without the need for a meretricious selling of our wares. It’s about being content to let others discover the layers of our talents without having to boast about them. It’s a lack of arrogance, not a lack of aggressiveness in the pursuit of achievement. An interesting dichotomy is that, often, the higher people rise, the more they have accomplished, the higher the humility index. Those who achieve the most brag the least, and the more secure they are in themselves, the more humble they are.

“True merit, like a river, the deeper it is, the less noise it makes”.
Edward Frederick Halifax

In SIkhism, humility is a virtue greatly revered and modelled by our gurus. It is called “nimrata”- or

The Sikh Gurus set many examples of meekness and humility.

“…Sri Guru Angad Dev Sahib Ji appointed Sri Guru Amar Das Sahib Ji as third Sri Guru Nanak Sahib in March 1552 at the age of 73. He established his headquarters at the newly built town of Goindwal Sahib, which Sri Guru Angad Dev Sahib Ji had established. Meanwhile, going against his father’s wishes, Datu one of Guru Angad’s sons proclaimed himself as Guru at Khadur following his father’s death. He was so jealous of Guru Amar Das that he, with a small group of his supporters, proceeded to Goindwal to confront the Guru. Upon seeing Guru Amar Das seated on a throne surrounded by his followers he said, “You were a mere menial servant of the house until yesterday; how dare you style yourself as the Master?”. At that point, Datu kicked the aged Guru Amar Das so hard that he fell to the floor. Taking the seat of the Master he then proclaimed himself Guru to the assembly of Sikhs. The Sangat must have been shocked as this not only flew against Guru Angad’s wishes, but against centuries of respect that the people of India and the Punjab had for their elders, to kick the revered Guru was indeed – shocking.
Guru Amar Das, however, in utter humility, righted himself and caressed Datu’s foot saying, “I am old and my bones have grown very hard, I fear they have hurt your tender foot.”
After this Guru Amar Das left Goindwal that evening and returned to his native village …”

Similarly Sri Chand, Guru Nanak Dev Ji’s son asked Guru Ramdas Ji in a humorous way why he had kept such a long and flowing beard. The Guru replied: “To wipe the dust off your holy feet.” Sri Chand was much impressed by the Guru’s humility.

The direction is set, the goal is clear, the journey an ongoing one. 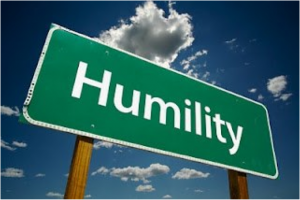 We are guided by Guru Arjan Dev Ji in the following way: 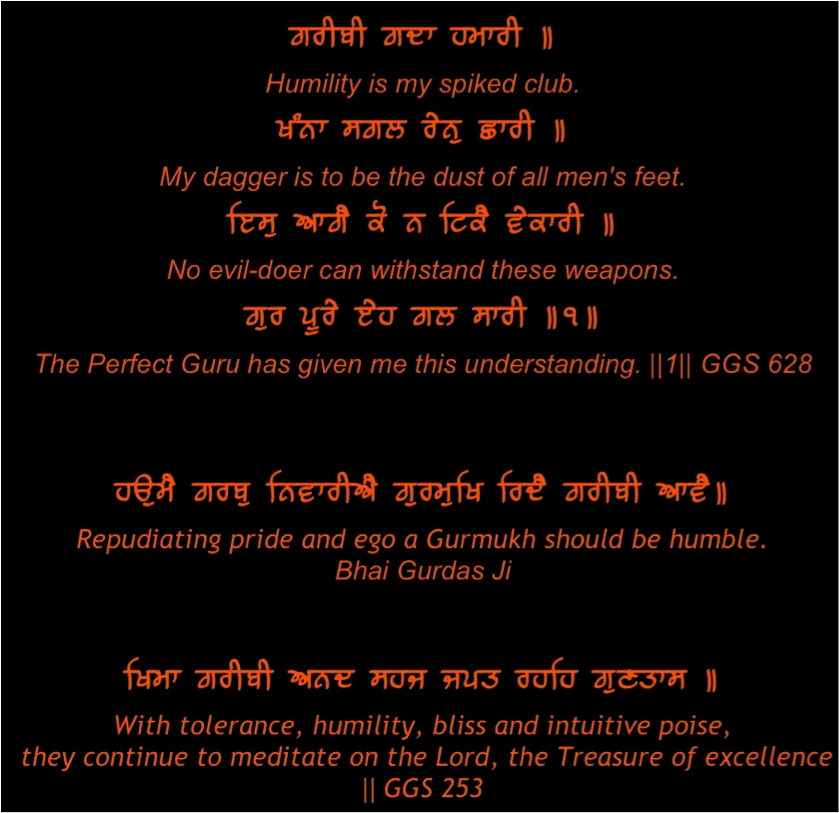 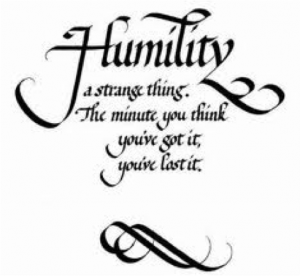 Where and how does one get that confidence?

In the company of Sadh Sangat, the Master awakens, unfolds our consciousness layer by layer such that one becomes more and more aware of one’s own limitations and His Greatness. The feeling of awe generates humility and the feeling of His omnipresence generates confidence. Through this type os an intuitive understanding of humility one is lead from

Humility is the ability to be humble while maintaining one’s integrity. You do not need to be boastful or tell people how wonderful you are or how much you know or what you can do. Although you may be quite knowledgeable or competent, it is for others to discover through your behaviour and your actions. It is your ability to sincerely apologize when you have erred and help others who are in need without expecting thanks or compensation.

A viewpoint that leads you to humility is to see your primary role in this existence as that of a servant – as someone that creates joy for others. This perspective gives you a mindset of empathy, support, willingness, tolerance, patience, gratitude, forgiveness, and balance that transcends the ego’s need for superiority. Seva is a prime example of this.   Our mental model of a humble person is often that of a person stooped over in a submissive pose. I do not believe this is a good model. You can be humble, yet be forthright and enthusiastic about life and your connection to it. Many things we do, say, or achieve appease our ego’s need for self-esteem or feelings of superiority. To achieve without arrogance requires a conscious decision on our part to do our best in some way while not allowing our ego to capitalize on the result.

The Tao puts it this way:

a wise person acts without claiming the results as hers or his;

they achieve merit yet do not rest proud in it.

We are all a work in progress with the potential of being God! What is required is great patience, persistence and faith. 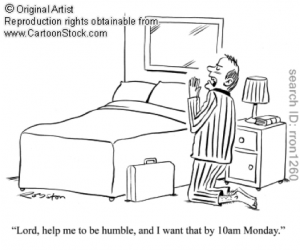 With much love
RA

Leave a Reply to An Ant Cancel reply