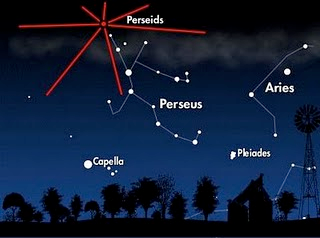 The following post is by our first contributor. Thank you so much J!!!

Really appreciate you taking the time to share your thoughtful insights and unique experience.I thought, however that perhaps a little bit of a background might help our younger sangatees. Here’s a  brief look intro to history of the Perseids

The event is also known as “The Tears of St. Lawrence.”

Laurentius, a Christian deacon, is said to have been martyred by the Romans in 258 AD on an iron outdoor stove. It was in the midst of this torture that Laurentius cried out:

“I am already roasted on one side and, if thou wouldst have me well cooked, it is time to turn me on the other.”

The Saint’s death was commemorated on his feast day, Aug. 10. King Phillip II of Spain built his monastery place the “Escorial,” on the plan of the holy gridiron. And the abundance of shooting stars seen annually between approximately Aug. 8 and 14 have come to be known as St. Lawrence’s “fiery tears.”

We know today that these meteors are actually the dusty remains left behind by the comet Swift-Tuttle. Discovered back in 1862, and most recently observed in 1992, this comet takes approximately 130 years to circle the sun. With each pass, Comet Swift-Tuttle produces a debris trail along its orbit to cause the Perseids. 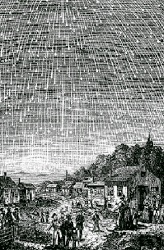 The Perseids meteor shower is the most active meteor shower that we get to see from the earth. This year, with the moon setting in the early evening, we had the pleasure and the blessing to see this meteor shower almost crystal clearly from Ottawa. There’s a small park not too far from my home where there’s not too much artificial light. Typically, I’d think “this is a kind of unsafe little park”, but tonight, it was just perfect. As you may know, too much artificial light reflects in the night sky, and reduces the visibility of the meteors in the sky.
I spent a couple hours lying down on the damp grass in the park, hearing the bugs buzzing around me, feeling the grass blades on my ears and on my neck, hearing small animals in their sleeping stupor in the trees around me. In my current schedule, I no longer take the time to reconnect with nature. Tonight, that was just one of the blessings I got to experience. There’s so much more to our lives beyond ourselves and the people around us. There’s much we take for granted.

As I was lying there looking into the sky, anxiously awaiting each meteor as it appeared from different parts of the sky, I couldn’t help but letting my mind wander a bit, to try to understand just exactly what I was seeing, and what it meant in my life.

And so, there I was, lying there on the damp grass with my insect and animal friends, and the blades of grass, looking up into the night sky at the meteors. See, the reason we see these meteors is because we enter an area of high-debris. This debris enters our atmosphere, where it burns up, and as a result, we see the piece of debris, and a trail of light as it slowly burns into nothingness. And when you compare it to the stars in the sky, it looks wondrous. God is truly great.

And we– we’re arguably hundreds of times smaller than a single house. We are so so small. We are so so insignificant in the grand scheme of God’s creation. After we die, the meteor shower will still occur every year…

We are small and insignificant creatures, who control only our own thoughts, actions, habits, characters, and destinies. There is so much beyond us. We are like those pieces of debris that enter the Earth’s atmosphere. Some of us will be brighter, and leave longer trails, but eventually, we too will end. And only the great Creator will ultimately remember our deeds and our paths and our actions.

So ultimately, who is it that we should be pleasing? The other meteors? Or the ultimate Creator? We spend far too much time pleasing each other, when the only way for our flame never to extinguish, for our meteor to never burn into nothingness, is to cultivate our relationship with God, while still fulfilling all the things we need to do to be successful and responsible and contributive in this life. To do all that WITH the Spark of Love is the ideal goal. Without that Love, all is for naught, all goes to waste, and it’s all useless… But the Spark of Love… The Spark of Love remains forever, and you will be forever Immortal in the eyes of God.

My body has become immortal, in the Saadh Sangat, the Company of the Holy. Both birth and death have come to an end for me. ||1||

Many many thanks for sharing this wonderful experience.

(Hope to see you all in Ottawa)

One thought on “The Perseids meteor shower”